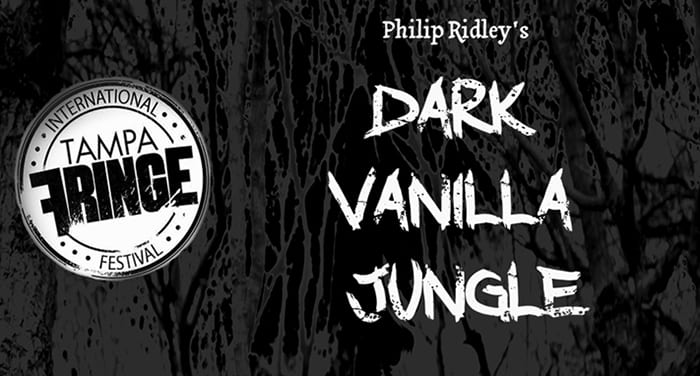 Why should you attend DARK VANILLA JUNGLE when there will be 87 performances at 6 venues over the 4 days of the Tampa Fringe Festival?

This will be unlike any play that you have seen in your life.

Playwright Philip Ridley is masterful as he crafts Andrea’s story in DARK VANILLA JUNGLE.  As Andrea reveals and relives key moments in her life, the audience will be taken on the ride of their life.  Much like a roller coaster in the dark, this one-woman-show will leave hearts racing and post-show conversations buzzing.

Marie-Claude Tremblay’s solo performance as Andrea will make you laugh, cry, and squirm in your seat.  When asked why Tremblay wanted to play Andrea she responded, “This is a scary project for me which is why I took it on: to grow as an artist you have to do things that scare you.  But my terror pales in comparison to the terror that millions of women like Andrea go through every day.  Their story needs to told and their voice needs to be heard.”

This is Director Staci Sabarsky’s third time directing this production.  “They say three time’s a charm,” Sabarsky muses.  “I’ve been incredibly lucky to direct this show more than once to wonderful reviews.  I’m thrilled to have the opportunity to be a part of the first annual Tampa Fringe Festival and bring this show to Tampa audiences.”

About the 2015 Raleigh, North Carolina production, the Indy Week five-star review by Byron Woods said: “As we watch with concern and increasing horror, we can see an elastic young mind gradually rewiring itself in response to the damage it’s known.  As it does, something dark and very hungry blossoms in a bright young girl, in the most compelling local production I’ve seen in quite some time.  Drop everything; this you’ve got to see.”

About the 2016 production at The Camden Fringe Festival in London, www.londoncitynights.com awarded a four-star review and wrote: “Philip Ridley is a playwright notorious for grappling with subjects most would rather sweep under the rug. His work covers the gamut of extreme violence, sexual perversion and psychological oppressiveness, all slathered with pitch black humour and an obsessive attention to detail. But, even amongst his atrocity-studded bibliography, DARK VANILLA JUNGLE has a certain notoriety.” The review continues, “Part confessional/part autobiography, Ridley introduces us to Andrea, a young girl. All she wants is to love, and to be loved in return. Yet life can’t stop kicking her in the teeth: her father disappeared soon after she was born, leaving her to be raised by her couldn’t-give-a-shit Mum, who callously and suddenly disappears upon his return. Abandoned in a grotty flat, she tiptoes along the borders of mental illness until she’s ‘rescued’ by her never before seen grandmother.” The result is “…a symphony of horribleness. But hey, that’s Ridley for ‘ya.”

This is one show in the festival you don’t want to miss. And one you’ll never forget.